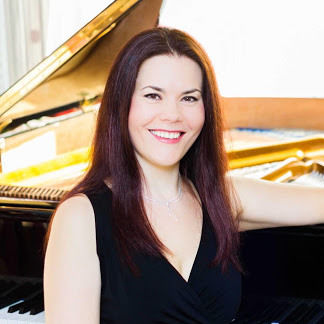 The Ukrainian-Austrian pianist Anna Ulaieva began her musical studies at the age of 5, receiving instrumental lessons on both violin and piano.

After having won a number competition prizes by the age of 11 for highly gifted children on both instruments, Anna chose the piano as her main instrument and started taking piano lessons with Prof. Nina Naiditsch at the "M.V. Lysenko" high school for gifted children in Kiev (Ukraine).

She then continued her piano studies at the "Tchaikovsky National Academy of Music" in Kiev with Yuri Kot and graduated with distinction. As a laureate of the "New Names of Ukraine" programme, her exceptional talent was honored by a scholarship awarded by the President of Ukraine.

From 2009 she completed her piano studies at the University of Music and Performing Arts Graz (Austria) with Prof. Milana Chernyavska and graduated in 2017 with excellent results.

Anna Ulaieva has won prizes at numerous renowned international competitions. Her greatest success to date is the 1st prize at the "Malta International Piano Competition 2018". More than 720 pianists from more than 70 nations competed in the largest competition series in the world to win the largest prize money in competition history (1st prize 100,000€). Another milestone in her remarkable career was to receive a Blüthner Grand Piano as 1st prize after winning the Blüthner Golden Tone Award 2013.

Now she is herself a sought-after jury member at numerous international music competitions. Most recently at competitions in Serbia and Ukraine.

Anna Ulaieva made her solo debut in Kiev in 2001 with the Philharmonic Orchestra of Ukraine. Since then she has performed solo recitals and chamber and orchestra concerts all over the world and is a frequent guest at various festivals. She regularly performs with renowned orchestras such as the Chamber Orchestra of Bavarian Radio, Kiev Virtuosi Orchestra, National Symphony Orchestra of Ukraine, and such conductors as Dmitry Jablonski and Christian Jarvi.

Her live CD recording of Tchaikovsky’s Seasons and Prokofiev’s sonatas confirms her artistic and pianistic abilities.

Anna Ulaieva is a lecturer at the University of Music and Performing Arts Graz, where she leads the highly gifted and preparation piano class. She also teaches at master classes in Austria, Portugal and Ukraine.

A special concern of Anna’s is the advancement of highly gifted children and juveniles. In order to address this, she founded the master class "Gifted in Music" Kapfenberg (www.giftedinmusic.at) and acts as its artistic director.