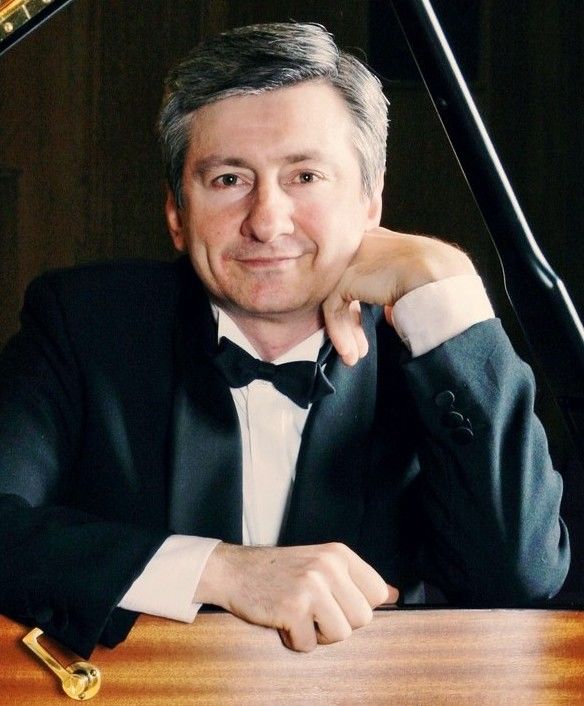 Vladimir Ovchinnikov continues the traditions of the world known G. Neighaus Piano School. The pianist is a graduate of the famous Central Special Music School (the class of A. Artobolevskaya) and the Moscow Conservatoire (class of Prof. A. Nasedkin).
The only pianist ever to win the top prizes at the International Tchaikovsky Competition in Moscow (1982) and Leeds International Piano Competition (1987), Ovchinnikov is also a laureate of the Concours International de Montreal (Canada, 1980, 2nd Prize), and the International Chamber Ensembles Competition in Vercelli (Italy, 1984, 1st Prize). It was his success at Leeds, however, which established his international career, a triumph which was followed by a triumphant début performance in London in the presence of Her Majesty the Queen.
He appears regularly with leading orchestras all over the world, including the Royal Philharmonic Orchestra, the Philharmonia Orchestra, BBC Symphony Orchestra, the Royal Scottish National Orchestra, the City of Birmingham Symphony Orchestra and the English Classical Players in the UK.
Mr. Ovchinnikov possesses a wide repertory and appears in all major cities throughout Europe and the USA. As internationally renowned pianist he had the honour to perform at the most prestigious concert halls and appear in many festivals.
For several years he was the Guest Professor of Piano at the Royal Northern College of Music in England. Currently he is the Resident Professor of piano at the Moscow Conservatory, Moscow State University in Russia and guest professor of piano at Sakuyo University, Japan. He has also been a jury member of many international competitions.
In 2005 Vladimir Ovchinnikov received Russia’s highest award and honor for Musicians – the title National Artist of Russia awarded by the President of Russia, Vladimir Putin.